From Mises Wiki, the global repository of classical-liberal thought
(Redirected from Robert Morris (financier))
Jump to: navigation, search
This article is a stub. You can help Mises Wiki by expanding it. 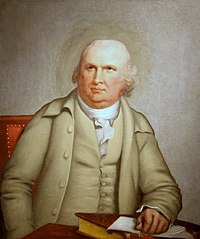 Robert Morris, Jr. (20 January 1734–8 May 1806) was the financier of the American Revolutionary War and the head of the Bank of North America.

Morris was a wealthy Philadelphia merchant and virtual economic czar of the Continental Congress in the last years of the war. He was the leader of the nationalist forces and a firm supporter of fiat paper money. He introduced a bill that called for the charter of a centralized bank, private in its operation, which would be the sole issuer of money to the federal government. Morris, failing to raise enough capital to launch the Bank of of North America, in an act tantamount to embezzlement, simply appropriated specie loaned to the U.S. by France and invested it in his bank. A multiple of these funds was then borrowed back from Morris's bank by Morris himself as government financier for the financial benefit of Morris as a banker. Morris channeled most of the money into war contracts for his friends and business associates. [1] [2]