From Mises Wiki, the global repository of classical-liberal thought
Jump to: navigation, search
This article may require cleanup to meet Mises Wiki's quality standards. Please improve this article if you can.

This 1973 oil crisis was preceded by price controls in the United States, which suffered a lack of gasoline as a consequence.[2]

After the Second World War, government controls in the USA over the petroleum industry were removed and the nation's energy supplies expanded. The increasing demand for energy was reflected in higher prices for natural gas and petroleum products, but the prices for these energy products actually declined relative to the general price level. This meant that the real cost of energy declined, whether measured relative to the cost of other goods and services or in terms of resource costs per unit of energy produced.

In the 1960s, the government again intervened in the energy sector to control prices and production. In 1961, the Federal Power Commission imposed a price ceiling on natural gas at the wellhead for interstate sale of natural gas. In the 1970s, a mandatory allocation program required some petroleum companies to sell their natural gas to pipelines in other parts of the nation at controlled prices. Following the imposition of price controls, the supply of natural gas failed to keep pace with rising demand. The number of natural gas producers dropped from 18,000 in 1956 to 4,000 by 1971. As demand for natural gas outstripped supply in the non-producing states, consumers turned to alternatives such as fuel oil, liquefied gas from Algeria, and synthetic gas. In terms of energy yield, fuel oil on average sold at twice the free market price of natural gas in the 1970s. Some firms relocated to states that produced and sold natural gas at the unregulated price. Both of these responses, i.e., reliance on alternative energy sources and relocation in order to assure a supply of natural gas, involved inefficiency and misallocation of resources.

Government regulations were also imposed on the oil industry. The price of petroleum products was controlled first by jawboning in 1969 and then by mandatory controls in 1971. This period witnessed the most rapid rate of inflation since the Civil War. As the real price of oil declined, the supply of domestically produced petroleum declined and the share of petroleum imports increased. At controlled prices, the earnings of oil producers decreased, and there was little incentive to invest. By the time of the oil embargo of 1973, there were half as many drilling rigs in operation in the continental US as there were twenty years before. Dependence on imported petroleum approached half of the total consumption.[3]

In October, 1973, the Organization of Arab Petroleum Exporting Countries announced that its member states would immediately cut oil production by 5 percent and continue to do so each and every month until Israel withdrew from the West Bank, Gaza, and Jerusalem. Days later, Saudi Arabia and Kuwait announced even more dramatic production cuts, and most Petroleum Exporting members likewise declared that they would stop selling oil to the United States until America abandoned support for the state of Israel.

Some people believe that the embargo was directly responsible for long gasoline lines and for service stations running dry. The shortages were, in fact, a byproduct of price controls imposed by President Nixon in August 1971, which prevented oil companies from passing on the full cost of imported crude oil to consumers at the pump (small oil companies, however, were exempted from the price control regime in 1973). In the face of increasing world oil prices, "Big Oil" did the only sensible thing: it cut back on imports and stopped selling oil to independent service stations to keep its own franchisees supplied. By May of 1973, five months before the embargo, 1,000 service stations had shut down for lack of fuel and many others had substantially curtailed operations. By June, companies in many parts of the country began limiting the amount of gasoline motorists could purchase per stop.

In response, Congress passed the Emergency Petroleum Allocation Act about a month before the embargo, which made matters worse. The Act mandated that supply reductions had to be shared equally between independent and branded gasoline stations. It also put a small percentage of gasoline going to each state under the governors' control, which they could then allocate as they wished if shortages occurred. And occur they did, largely because of the withdrawal of supplies from the market necessary to put together the governors' set aside.

Did the subsequent embargo stoke the crisis further? No - the embargo had no effect on imports. Once oil is in a tanker, no one can control where it goes. Oil that was exported to Europe during the embargo was simply resold to the United States or ended up displacing non-OPEC oil that was diverted to the U.S. market. Supply routes were shuffled but import volumes remained steady.

Saudi oil minister Sheik Yamani conceded afterwards that the 1973 embargo "did not imply that we could reduce imports to the United States ... the world is really just one market. So the embargo was more symbolic than anything else." In his memoirs, then Secretary of State Henry Kissinger wrote that, looking back, "the structure of the oil market was so little understood that the embargo became the principle focus of concern. Lifting it turned almost into an obsession for the next five months. In fact, the Arab embargo was a symbolic gesture of limited practical importance."

While the embargo was an illusion, the production cutbacks were real. Arab oil production between October and December was cut by 340 million barrels. But that cutback was less than the inventory buildup that had occurred earlier in the year. There was still plenty of oil to go around, but few were willing to sell it given the fear of future scarcity.

Moreover, the Petroleum Exporting Countries' threat to gradually cut oil production to zero until Israel left the occupied territories lasted all of a month and a half. On Dec. 4, 1973, the Saudis cancelled their promised monthly 5 percent cutback and the rest of the Petroleum Exporting Countries followed. In January 1974, they ordered a 10 percent production increase. No more was heard of the threat.[2] 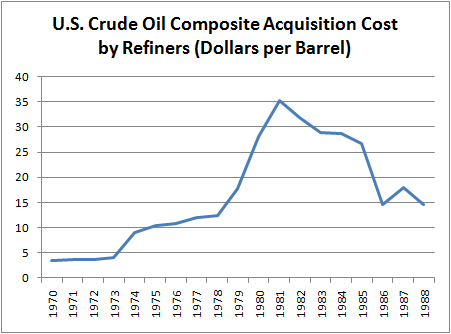 Although price controls on gasoline ended when the Arab embargo was lifted in 1974, the Federal Energy Agency (FEA) continued to maintain price controls on crude oil produced domestically. The price of old oil was controlled at about $5.25 per barrel. New oil from wells put into production after November 1975, plus output from old wells that exceeded the base period output levels, was controlled at a price of about $1 per barrel.

The entitlements program placed a tax on domestic production of crude oil and subsidized refinery purchases of imported oil. The United States, in effect, paid a subsidy of about $3 for every barrel of oil imported. Needless to say, this policy discouraged domestic production of petroleum. By holding petroleum prices below the market price, the entitlements program led to wasteful use of petroleum resources and discouraged the development of alternative energy sources. The market has not solved the energy crisis because the market has not been permitted to operate.[3]