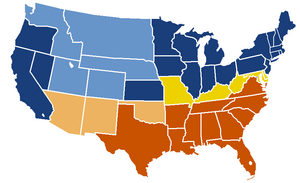 The American Civil War (1861–1865), or War Between the States (see also "Names," below), was a sectional conflict in the United States, in which 11 states attempted to secede from the nation against the wishes of the others. South Carolina, Georgia, Florida, Alabama, Mississippi, and Texas seceded and formed the Confederate States of America (the "confederacy") upon the election of President Abraham Lincoln in 1860. Virginia, North Carolina, Tennessee, and Arkansas followed suit when Lincoln began raising an army to invade the Southern states.

The causes of the South's desire for secession were high tariffs imposed by the federal government that disproportionally hurt the southern economy, and violations of state sovereignty, especially regarding the institution of slavery. The causes of the North's aggression, on the other hand, were a rejection of the compact theory of the Constitution, nationalism, a desire for consolidated federal power, and, among some, to free the slaves in the seceding states.

During the war, Lincoln fought to prevent the border states, especially Maryland, from seceding, and to do so he suspended the writ of habeas corpus and jailed pro-secession activists and journalists. He also welcomed the secession of West Virginia from Virginia, accepting it as a new state in the Union in 1863. In 1861 he had expressed support for the pro-slavery Corwin Amendment, but as the war progressed, his anti-slavery rhetoric increased, culminating in the Emancipation Proclamation, which decreed the slaves free who remained in areas outside the control of the Union army but did not affect the status of slaves held in Union states.

Early in the war the confederacy enjoyed major victories, but the south's weak navy, limited industrial capacity, lack of foreign allies, and several costly battlefield losses later in the war resulted in a Union victory. Estimates of the total dead range from 600,000 to 1,000,000.

In the war's aftermath, the thirteenth amendment to the Constitution was ratified, outlawing slavery. As a condition for readmission into the union, the confederate states were forced to ratify the fourteenth amendment, broadly defining citizenship and consolidating federal power.

The most common name for the war is the "American Civil War," and a popular alternative in the Southern United States is the "War Between the States." However, many classical liberals and others have rejected these terms as inadequate. The first is considered inaccurate and unhelpful because the war was waged to put down a secession movement, not to overthrow the central government in Washington, DC, as is suggested by the term "civil war".[1] The second, while less objectionable, is rejected because it suggests that each state was an independent belligerent fighting against all others, rather than there being two distinct groups of states who fought against only those states in the other group.

Other names proposed include the "Second American Revolution" and the "War to Prevent Southern Independence."[1]

Both sides in the Civil War had to print money. But by the end of the war the Union’s ‘greenback’ dollars were still worth about 50 cents in gold, whereas the Confederacy’s ‘greybacks’ were worth just one cent, despite a vain attempt at currency reform in 1864. The Confederate government had to print unbacked paper dollars to pay for the war and its other expenses, 1.7 billion dollars’ worth in all. The situation was worsened by the ability of Southern states and municipalities to print paper money of their own; and by rampant forgery, since Confederate notes were crudely made and easy to copy. With ever more paper money chasing ever fewer goods, inflation exploded. Prices in the South rose by around 4,000 percent during the Civil War. By contrast, prices in the North rose by just 60 percent. Even before the surrender of the principal Confederate armies in April 1865, the economy of the South was collapsing, with hyperinflation as the sure harbinger of defeat.[2]