We show our sympathy with slavery by emancipating slaves where we cannot reach them and holding them in bondage where we can set them free. 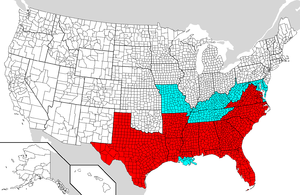 Areas covered by the Emancipation Proclamation are in red. Slave holding areas not covered are in blue.

The Emancipation Proclamation was an executive order issued on January 1, 1863 by President Abraham Lincoln. In the midst of the American Civil War, it proclaimed the emancipation of slaves in areas of the Confederate States of America not under Union control.

The initial proclamation, issued September 22, 1862, warned that all slaves in states still in rebellion as of January 1, 1863 would be emancipated. However, the final proclamation, issued January 1, 1863 specifically exempted from emancipation all slaves in areas where the Union army had control, including many counties in Virginia and the entirety of Tennessee. Furthermore, all slaves in Union states, such as Delaware, Kentucky, and Maryland, were unaffected.[1][2]

I have no purpose, directly or indirectly, to interfere with the institution of slavery in the States where it exists. I believe I have no lawful right to do so, and I have no inclination to do so.[3]

Early in the war, two of Lincoln's generals, in separate incidents, issued emancipation proclamations to free slaves in territories of which they had gained control. In both cases, Lincoln overturned the proclamations.[4]

However, Lincoln reversed course as the war went on, drafting the Emancipation Proclamation as a "war measure." After a string of Confederate victories on the battlefield, a draw at the Battle of Antietam gave Lincoln the opportunity to make the initial proclamation, on September 22, 1862. One hundred days later, on January 1, 1863, the second proclamation went into effect.

In response to the proclamation, the New York World editorialized:

The President has purposely made the proclamation inoperative in all places where we have gained a military footing which makes the slaves accessible. He has proclaimed emancipation only where he has notoriously no power to execute it. The exemption of the accessible parts of Louisiana, Tennessee, and Virginia renders the proclamation not merely futile, but ridiculous.[1]

William Seward, Lincoln's Secretary of State, sarcastically said "We show our sympathy with slavery by emancipating slaves where we cannot reach them and holding them in bondage where we can set them free."[1] In London, the Spectator wrote that "the principle" of Lincoln's proclamation "is not that a human being cannot justly own another, but that he cannot own him unless he is loyal to the United States."[1][2]