Capital are the goods that were produced by previous stages of production but do not directly satisfy consumer's needs; they are used in production to eventually produce consumer goods.[1]

The formation of capital

In the simplest example of an economy (the "Robinson Crusoe economy"), a person can spend time producing consumer goods and consuming them. In order to produce capital goods, he must save, i.e. consume less than his means allow in the present. With capital, he can produce more and so consume more in the future.

The creation of capital goods is called investment.[1]

Capital makes the production process more "roundabout"; in general are these methods are more productive than shorter, more direct methods. An actor will opt for longer, more roundabout methods so long as the enhanced output more than offsets the increased waiting time, which in itself is a disadvantage because of time preferences.

There are two ways in which longer processes of production through the use of capital may increase productivity:

The perishable nature of capital

Reallocation of capital and capital as sunk costs

The prevailing view assumes that capital is simply one of many factors used in equations, functions, and models. Capital is homogenous, so the greater the amount of capital, the better off society is. And it does not even matter how capital has taken shape in the past, since, once formed, it can be reformed wherever and whenever needed. It could be likened to clay, ready for the potter to reshape it in a moment's time.

But, in reality, capital is always a historic relic, a product of previous efforts and most of the time a sunk cost. It is not some mass that can be modified free form to fit the needs of today and tomorrow. As an example, note an old abandoned factory. It may be evidence to the massive investment of resources - but now it is evidence of the unyielding nature of most capital, a sunk cost with little to no alternative use.

If a company has (say) $100 million invested in technology, and the cost of a new system is $110 million, it does not mean that the effective cost is just an additional $10 million ($110 million minus the current capital of $100 million). The $100 million cannot be simply dipped into the new system. Some components of the current system may be portable to the new system, and reduce the total expenditure. But capital is, for the most part, fixed and sunk. This is especially true when it is mature and integrated into other systems.

If the capital was malleable, there would be no real concern of credit expansion (see Inflation) leading to a misallocation of capital, it would be just a minor inconvenience. In reality, misallocations are wasted resources, including precious and scarce time. Misallocated capital is of no use to anyone. It is a loss to the entrepreneur, the investor, and the consumer.[3]

If one believes that prices work to allocate resources, there is always the possibility that a misguided, bankruptcy-inducing investment by one entrepreneur will represent a profit opportunity for another. If there's a market for used cement trucks, why should a cement truck purchased under incorrect price signals lie idle when its original owner has gone under?[4]

Let’s imagine that a construction company in Silicon Valley, at the height of the dot-com building spree, purchased a cement truck. When the bust came, construction work in the Valley dried up, and the company went bankrupt. Whither now the truck?

It is very unlikely that another construction company in Silicon Valley would want it. They had all over-expanded as well, and now they may be looking to sell some of their own equipment. But let’s assume that somewhere—say, Texas—there is a company that can use the truck. The first thing that has to happen is that the buyer and seller must find each other. Rather than occurring on the very day the Silicon Valley company goes bust, such a process may take weeks or months. The courts will have their say about which creditors are entitled to what portion of the remaining assets of the bankrupt company. Then the truck is likely to move to a reseller of used construction equipment. It will advertise the truck’s availability. The downturn probably will necessitate a drop in the price of cement trucks, but by how much? Unlike in mathematical models, where supply and demand curves shift and a new price simply appears, in a market process view, buyers and sellers must undertake a process of price discovery. The seller will be reluctant to lower the price too rapidly, and so he may be overly optimistic for a time, delaying a sale. Eventually, when a potential buyer hears of the availability of the truck, he may want to inspect it before putting out the money to buy it. Once the transaction is complete, the truck will have to travel from California to Texas.

All of the above actions take time, and all of them have associated costs. Furthermore, note that none of them involve employing any cement workers. Eventually, a worker laid off in Santa Clara may find work in Dallas, but his change of residence will also involve time and expense.[5]

Not every technological improvement is immediately applied - but then, not everybody throws away his old car or his old clothes as soon as a better car is on the market or a new fashion trend. In these considerations are people are motivated by the scarcity of available goods.

Let's say a new machine is constructed, more efficient than currently used machines. Should the plants replace the old machines, while they are still usable, and replace them with the new model? Only if the additional expenses are compensated for, is the scrapping of the old equipment economically sound. The same considerations apply for the moving of an existing plant to a location with more favorable conditions.[6] 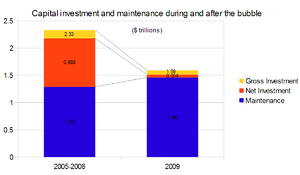 A large part of investment must be spent simply to offset wear and tear and obsolescence of the existing capital stock.

In a country such as the United States, with an enormous fixed capital stock built up over the centuries, a great amount of funds must be allocated simply to maintain that stock. According to an estimate, in 2006, gross private domestic investment reached its most recent peak, at $2.33 trillion (in constant 2005 dollars). After remaining almost at this level in 2007, this measure of investment fell substantially during each of the next two years, reaching $1.59 trillion, in 2009. The "private capital consumption allowance" that attempts to measure these maintenance costs, has ranged from $1.29 trillion in 2005 to $1.46 trillion (in constant 2005 dollars) in 2009. Thus, even in the boom year 2006, about 60 percent of gross private domestic investment was required merely to maintain the economy’s productive capacity, leaving just 40 percent, or $889 billion in net private domestic investment, to increase that capacity.

From that level, net private domestic investment plunged during each of the following three years, it fell in 2009 to only $54 billion (in constant 2005 dollars), having declined altogether by 94 percent from its 2006 peak! In 2009 only 3.5 percent of all private investment spending went toward building up the capital stock. Thus, net private investment did not simply fall during the recession; it virtually disappeared - while the maintenance costs kept increasing.[7]

Because capital is perishable, it must be renewed, if man wishes to enjoy the fruits of higher production. Saving must be repeated over and over, capital could break down and be replaced in whole or be repaired and kept in shape.

Man can avoid the trouble of saving and enjoy a higher consumption now. But if the capital is not replaced, production will later drop. Instead of saving and maintaining capital structure, capital is consumed. In this case, time preference has led man to prefer more present consumption, in exchange for greater losses in future consumption.[2]

Workers use capital goods to augment their labor to create consumption goods. Because of the time structure of production, it is possible to temporarily boost everyone's consumption, but only at the expense of maintaining the capital goods, which are so "consumed." At some point, reality sets in, and no "stimulus" policies can prevent a sharp drop in consumption.

In the boom period of the business cycle, people consume more - even while new, unsustainable investment projects are started. Sustainable projects initially require, that investors reduce their consumption and channel their savings into new projects. But during a boom induced by a central bank, there hasn't been real savings to fund the new investments. That's why the boom is unsustainable, but also explains why consumption increases at the same time as investment in new projects. This is impossible in the long run, but possible in the short run. What happens is neglect of maintenance on critical intermediate goods. A modern economy is very complex, and it can take years for an unsustainable structure to become recognized as such.

During the recession following the artificial boom period, resources need to get rearranged; certain projects need to be abandoned; and critical intermediate goods need to be replenished since they were ignored during the boom. It takes time for all the different types of materials, tools, and equipment to be furnished to resume normal growth. During that transition, the contribution of the labor of some people is so low that it's not worth it to hire them (especially with minimum-wage laws and other regulations). The result is unemployment.[8]