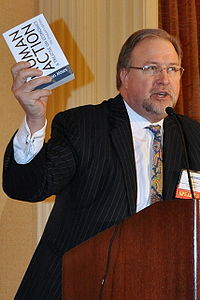 Douglas E. French is Senior Editor at Laissez Faire Club. He received his master's degree under the direction of Murray N. Rothbard at the University of Nevada, Las Vegas, after many years in the business of banking.

He is a major supporter of the Mises Institute, and has served as its president (2009-2012). He is the sponsor of the Douglas E. French Prize for the student who emerges from the Mises University oral examinations with the best record, as chosen by the examining committee.

He is the author of two books, Early Speculative Bubbles and Increases in the Supply of Money, the first major empirical study of the relationship between early bubbles and the money supply, and Walk Away, a monograph assessing the philosophy and morality of strategic default.

This article is a stub. You can help Mises Wiki by expanding it.
Retrieved from "https://wiki.mises.org/mediawiki/index.php?title=Doug_French&oldid=29960"
Categories: