Econometrics is the statistical and mathematical analysis of economic relationships, often serving as a basis for economic forecasting. Such information is sometimes used by governments to set economic policy and by private business to aid decisions on prices, inventory, and production. It is used mainly, however, by economists to study relationships between economic variables.[1]

Econometrics is a major field in contemporary mainstream/empirical economic research.

The most basic, fundamental starting point of econometrics is linear regression by Ordinary Least Squares (OLS), in which econometricians estimate the slope(s) of a given linear mathematical function (called “regression analysis”) comprised of economic variables (both dependent and independent), represented by observed data points. OLS is a tool for finding the “line of best fit” through a plotted data set, in which each entry in the given X data is paired with an entry in the Y data, i.e., the two are “observed” together.

where α is the intercept, β is the slope, and ε is the error term (disturbance). 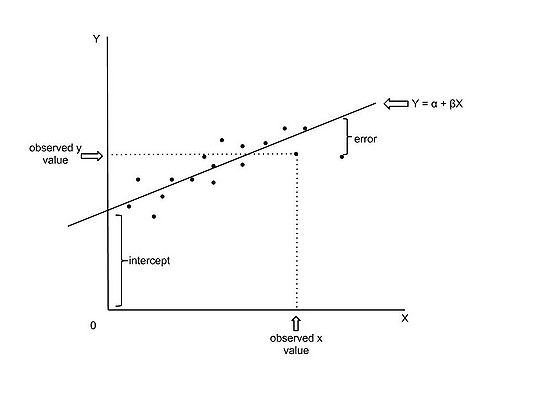 The model can be expanded to include multiple explanatory variables, interaction terms (i.e., covarying explanatory variables explain the outcome variable), multiple dependent variables (panel models), time-series regression (observations over time, autoregressive (AR), moving average (MA), both (ARMA), vector autoregression (VAR), etc.), dummy variables (for variables with only two values, like yes/no, male/female, etc.), and many other considerations. There are numerous estimation processes designed to deal with specific problems in the data (assumption violations) or to more correctly identify relationships between variables under different circumstances than those fitting for OLS.

Ordinary Least Squares, as implied by the name, seeks to minimize the sum of the squared residuals (squared distance between actual data points and the prediction (estimation) based on the linear relationship between the variables. This process, given certain assumptions, yields statistically unbiased (best approximation of true relationship), consistent (estimates get closer to true relationship with an increasing number of observations), and efficient (distance between actual and predicted values are smallest) estimates for the regression parameters.

For OLS to achieve unbiasedness, consistency, and efficiency (among other characteristics), a few assumptions about the regression model must hold. These are listed below with brief descriptions.

Hans-Hermann Hoppe has criticized the widespread use of “mathematical and statistical techniques” and has specifically addressed issues arising from estimating parameters via linear regression analysis.[2] He points out that the way the estimated parameters are interpreted normally would require assumptions that are “inappropriate in the social sciences”. The innocuous and fair interpretation of the estimated parameters would amount to nothing more than “historico-mathematical facts” with “no significance beyond the historical data with respect to which their values were determined”.[2]

His criticism of the inappropriate interpretation of linear regression centers around one fallacious assumption made by modern economists and econometricians: the constancy principle.[2]

Garrison points out that mathematics is unsuited for the task of identifying cause and effect relations.[3] In an article outlining problems with the mathematical/empirical methodology, he explains:

“The relevant question is: What sort of language—music, mathematics, or, say, English—allows economists best to communicate their ideas? […] And in particular the answer turns—both for Mises and for modern mathematical economists—on whether or not causality in economics is a worthy concern. For Mises causality was the central concern. His methodological individualism has as its goal the establishment of a causal linking of individual actions to observed economic phenomena. The very title of Mises's magnum opus identifies his starting point. Human action is the root cause of all economic phenomena.”[3]

And, like Hoppe, Garrison describes what the innocuous, but appropriate, interpretation of regression analysis results should be and how mainstream econometricians simply do not stop there, but make further assumptions to make inappropriate conclusions and interpretations: “Systems of equations can be suitably employed to describe the consequences of human action, but such mathematical descriptions are inherently blind to notions of intentionality and causality.”[3]

He also sees a disconnect between what the textbooks say and what the econometricians do.

“All respectable texts on statistics and econometrics acknowledge that statistical inference can never identify cause and effect; they warn against interpreting correlation as causation.”

“In recent years it has become acceptable within the economics profession to ignore all such acknowledgments and warnings and to make claims about cause and effect on the basis of empirical tests. For a hypothetical example, the claim that a rising interest rate causes the wage rate to fall may be supported by time-series analysis in which an inverse relationship between wage rates and lagged interest rates is demonstrated. The long-respected strictures against reading causality into statistical patterns are flouted. Empirical causality tests are increasingly common in the professional literature.”[3]

In Man, Economy, and State, Rothbard made some brief notes on econometricians' inability to identify causal relationships from mere mathematical equations.[4]

"Mathematical equations, then, are appropriate and useful where there are constant quantitative relations among unmotivated variables. They are singularly inappropriate in praxeology and economics. In the latter fields, verbal, logical analysis of action and its processes through time is the appropriate method. It is not surprising that the main efforts of the "mathematical econo­mists" have been directed toward describing the final equilibrium state by means of equations. For in this state, since activities merely repeat themselves, there seems to be more scope for de­scribing conditions by means of functional equations. These equations, at best, however, can do no more than describe this equilibrium state."[4]