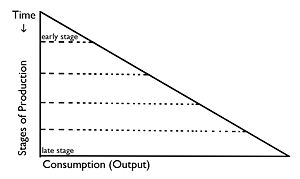 The Hayekian triangle is a diagram first presented in Friedrich Hayek's Prices and Production (1935) [1] [2] that organizes all spending in an economy in the shape of a triangle. It depicts production in stages, early (higher-order) to late (lower-order), ending with the final consumer good. Time is a significant factor and is represented vertically. In more recent replications and uses, the triangle has been turned 90 degrees counter-clockwise, so that time is represented horizontally, left to right.[3] This helps when juxtaposing the triangle's concept with other relevant diagrams, especially a production possibilities frontier of societal consumption and investment.

Early stages of production include the very first processes involved in producing a good, such as mining, harvesting, and other ways to collect natural resources. Late stages include the "final touches", distribution, and putting the item on the shelf for sale, so to speak. The very bottom (or rightmost, depending on how the triangle is oriented) depicts consumption, or money spent on consumer goods.

The shape and size of the triangle depends on how an economy allocates resources in consumption and investment. Here, interest rates are key. If a society decreases current consumption and saves more, real interest rates are lowered. With lower interest rates, entrepreneurs have more incentive to invest in earlier stages of production for two reasons: (1) consumers are spending less on retail goods, and (2) lower interest rates mean entrepreneurs can borrow more money, cheaper, for investment. This causes Hayek's triangle to expand vertically and become more narrow (in the original orientation), with the earlier stages receiving more funding and with less spending on the lowest-order goods. This primes the economy for even more opportunities for consumption in the future than was possible without the initial decrease in consumption that began the whole process. When this happens, the whole triangle becomes larger, with more opportunity to invest in production and spend on final goods.

If, however, the opposite occurs, and consumers increase spending on the final, lower-order goods, and society saves less, then interest rates are increased and less investment occurs in the earlier stages of production. This causes the triangle to become shorter and fatter, with fewer resources going toward production and more resources going toward consumption. A society that engages in this tradeoff sacrifices current investment and future consumption.

The triangle is distorted when interest rates are controlled by a central bank. A central bank can put downward pressure on interest rates by increasing the money supply whether or not society is saving more and consuming less. When this happens, the triangle loses its straight hypotenuse. Early stages of production expand, making the diagram taller, and the bottom of the diagram (consumption) also increases in size. This distortion in the economy is represented by a distorted hypotenuse (usually depicted as bowing inward), instead of an overall increase in the size of the triangle. This major societal malinvestment eventually causes the whole triangle to shrink, because resources were not being allocated through a real, market-dictated interest rate and society as a whole is now less able to save and less able to spend. This is, in essence, the basis of Austrian Business Cycle Theory. The Hayekian triangle therefore helps depict the main components of ABCT.

1 - It engages in economic aggregation.

2 - Given the many different ways that a good can be produced, how is a 'structure of production' really measured?

6 - Conflation of production and action.

7 - Conflation of goods-in-process or capital.

9 - Confusion in the time dimension (production should be forward-looking, but the triangle is backward-looking in some regards).

10 - An assumption of differentiability (i.e., that the triangle has a well-defined slope).

11 - No incorporation of the value of leisure.

13 - Whether it should really be a triangle.

Despite these objections, many (such as Block) maintain that it remains useful as a pedagogical tool. [5]

This article is a stub. You can help Mises Wiki by expanding it.
Retrieved from "https://wiki.mises.org/mediawiki/index.php?title=Hayekian_triangle&oldid=38043"
Categories: