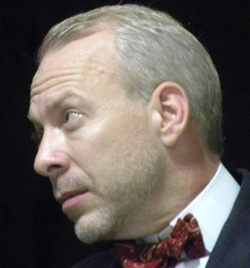 Jeffrey A. Tucker is the Chief Liberty Officer of Liberty.me, a social and publishing platform for liberty-minded individuals. He also is the publisher and executive editor of Laissez Faire Books, Distinguished Fellow of the Foundation for Economic Education, research fellow of the Acton Institute, economic analyst at the Daily Bitcoin, and consultant to Praxis. He is a former editorial vice president of the Ludwig von Mises Institute. He is author of several books including Bourbon for Breakfast (2010), It's a Jetsons World (2011), A Beautiful Anarchy, and The Annotated Bibliography of Henry Hazlitt (1992). He is adjunct scholar at the Mackinac Center, speaks annually for the Acton University, has been interviewed on countless media venues, and from 2007 to 2013,he wrote a weekly column for The Wanderer. He writes regularly on economics, culture, and society for Crisis Magazine, Laissez Faire Today, The Daily Anarchist, Fee.org, Mises.org, LewRockwell.com, InsideCatholic, and serves as publications director for the Church Music Association of America.