The term orphan works is used to describe the situation where the owner of a copyrighted work cannot be identified and located by someone who wishes to make use of the work in a manner that requires permission of the copyright owner.

Even where the user has made a reasonably diligent effort to find the owner, the user faces uncertainty – because there is always a possibility, however remote, that a copyright owner could bring an infringement action after that use has begun. In such a situation, a productive and beneficial use of the work is forestalled – not because the copyright owner has asserted his exclusive rights in the work, or because the user and owner cannot agree on the terms of a license – but merely because the user cannot locate the owner.[1]

Reasons for existence of orphan works

The extent of orphan works

In a 2009 survey in the United Kingdom, the average proportion of orphan works in collections across the UK’s public sector was measured at 5% to 10%, whilst in certain sectors (archives) this proportion was higher. The mid-range estimates from the survey put the total number of orphan works at a total of in excess of 13 million. Extrapolated across UK museums and galleries, the number of orphan works was conservatively estimated at 25 million, although the figure was likely to be much higher. (Responses from non-UK based respondents broadly corroborated the findings.)

Organizations spent on average less than half of one day tracing rights for each orphan work. Therefore it would take in the region of 6 million days effort to trace the rights holders for the 13 million works represented in the survey. In certain high profile projects, some organizations had spent large resources of time on chasing rights holders. However time and additional resources are also being used to educate the public and students and train (and remind) colleagues about the specifications of working with orphan works. At least 35% of organizations across all sectors, regardless of the size of their collections, do not have any specific resources in place to help deal with orphan works.[2]

Carnegie Mellon University Libraries conducted a study in 1999-2001 to determine the feasibility of acquiring copyright permission to digitize and provide Web access to books in their collection. Overall, publishers of almost a fourth (22%) of the books could not be found. In general, the older the book, the more difficult it was to find the publisher. In addition, the older the book, the more likely it was that the book was out of print — neither generating revenue for the copyright owner nor easily accessible to potential readers.

Sometimes copyright to a book is owned by many people, for example, the introduction, translation, photographs and figures could each be owned by a different person. If a potential creator or user wants to use the entire book, copyright ownership of each part or item must be traced through time. In the feasibility study, 11 percent of the books in the initial sample were eliminated from the study as too complicated to pursue because of third-party copyright ownership. Over a third (36%) of the publishers that were successfully located did not respond to multiple letters of inquiry. Most (79%) of the books about which they did not respond were out of print.[3]

A 2010 study in Europe reported the following: 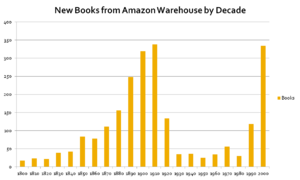 Even if potential users absorb the transaction cost and the copyright holder grants permission, potential users might not be able to afford the permission fee, which means the effort they expended was fruitless and their valuable time wasted.[3]

Because copyright terms are so long, in many cases extending well over a century, much of twentieth-century culture is still under copyright and unavailable. Much of this, in other words, is lost culture. No one is reprinting the books, screening the films, or playing the songs. In fact, it may not even be known who holds the copyright. Companies have gone out of business. Records are incomplete or absent. A film, for example, might have one copyright over the sound track, another over the movie footage, and another over the script. Not only are these works unavailable commercially, there is simply no way to find and contact the person who could agree to give permission to digitize the work or make it available in a new form.[6]

Some works have a known owner, but they are still not interested re-issuing them. There are tens of thousands of books, movies and music pieces, which had a discrete success at the time, faded away from the top-seller list, and are now out of print and impossible to purchase. Many of these products are valuable artistic pieces that have a discrete but small demand, too small to be "profitable" for media giants. They may be an attractive product for small publishers or music companies, they may be valuable inputs for new artists and creators that could find in them inspiration for additional works, but they are not worth the effort or re-issuing for the likes of the Disney corporation. Worse, re-issuing a substantial portion of these titles would "crowd out" current products that the same media giants are heavily marketing. Monopolists maximize profits by restricting supply, elementary economics teaches us, and a simple way of restricting supply of artistic work is to make sure that not too many "equivalent" western movies, adventure novels, comic novels, symphonic pieces, and so on, are available for purchase at any given point in time.[7]

What is rarely noted, orphan status may be most common for materials generated on the margins of society — by people whose names and presence were never recorded, sometimes because of persecution; or by informal or transient organizations, groups, and movements that never had an opportunity to create their own legacy. For this content — which includes some of the most important artifacts that a society is likely to produce, documenting both its struggles and those who speak without a recorded voice — formal interventions are unlikely to make a meaningful difference because there is so little ownership data to work with.

In an April, 2012 conference in the UC Berkeley Center for Law and Technology, the overall consensus, most succinctly aired by Brewster Kahle of the Internet Archive, is that the the problem is so pervasive and the barriers to a comprehensive resolution so high — while networked communications make sharing ever more straightforward — that institutions are increasingly prone to adopt a “Damn the torpedoes” approach. For these panelists, the prospect of new legislation attempting to facilitate use of material with dim rights status is often scarier than the status quo given political deadlock; further, uncertainty over the use of these materials is endemic but the risk is fairly low, in part because libraries, archives, and museums (LAMs) are respectful and conservative. At the same time, the cultural value is often tremendous.[8]

Some media deteriorates or is destroyed because copyrights prevent it from being copied onto other media and distributed. There are substantial costs involved in preserving information in its original medium until the copyright expires, and the devices used to retrieve the information may no longer exist by that time. An example would be wax phonograph cylinders from the early 20th century.[9]

In another example, the preservation of deteriorating piano rolls (made out of paper, used in the player piano, an old automated musical instrument popular in the US in the early 20th century) is hampered by copyright laws.[10]

This article is a stub. You can help Mises Wiki by expanding it.
Retrieved from "https://wiki.mises.org/mediawiki/index.php?title=Orphan_works&oldid=25678"
Categories: