The Economics of Prohibition 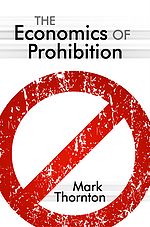 The Economics of Prohibition

The Economics of Prohibition was written by Mark Thornton and published by the University of Utah Press in 1991. The Economics of Prohibition was praised by Murray Rothbard, who declared: "Thornton's book... arrives to fill an enormous gap, and it does so splendidly.... The drug prohibition question is... the hottest political topic today, and for the foreseeable future.... This is an excellent work making an important contribution to scholarship as well as to the public policy debate."

Bruce Benson declared the book to be "a very insightful work that makes what I am sure will be recognized as significant contributions to the economics literature on crime, policy analysis, and illicit drugs."

"Professor Mark Thornton is one of a growing number of outstanding young economists who have helped to revive and to enhance the credibility of the Austrian School of Economics. In this excellent study, economic methodology is carefully married with moral and social philosophy to provide valuable insights into the divergence of intentions and results of prohibition laws. In fact, his approach to the thorny issue of prohibition may perhaps help to restore the credibility of economists at large as interpreters of public policy."