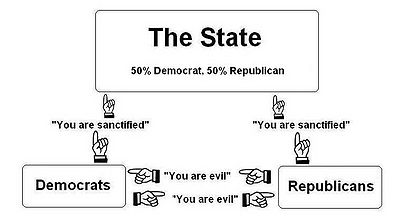 Pete Eyre's illustration of some of the ironies inherent in the two-party system.

A two-party system is one in which the government is controlled completely, or almost completely, by two political parties. An example would be the United States, whose most powerful parties are the Democratic and Republican Parties. Duverger's Law predicts that a first past the post election system will typically lead to a two-party system, although there are some exceptions, such as the United Kingdom, whose Liberal Party has contributed to the formation of coalition governments.

A two-party system is sometimes viewed as a more stable system than multi-party systems such as that of the Weimar Republic. This is partly because if all politicians belong to one of the two major parties, then it is ensured that one party or the other will have a majority in the legislature (there being procedures in place, such as a presiding officer's vote, for breaking any ties), and it will be possible for legislation to move forward. Of course, in many countries with a two-party system, it is still the case that one party might control one house of the legislature, and the other party the other; or a veto-wielding President may be of a different party than the legislature; and thus legislation can still be blocked if the two parties cannot agree.

Also implicit in the idea of a two-party system is that the parties will be of roughly equal strength; if one party were much more powerful than the other, especially if it had a sufficient supermajority to amend the constitution unilaterally, then it would arguably become a one-party system. The stability seems to assume that voters will take care to, regardless of ideology, not let one party get too powerful; and that voters will remain ideologically divided enough between the two parties to keep both parties at roughly equal strength. This could happen, for instance, if the two parties were to vie, with roughly equal success, to be as mainstream (and, therefore, as popular) as possible.[citation needed]

This article is a stub. You can help Mises Wiki by expanding it.
Retrieved from "https://wiki.mises.org/mediawiki/index.php?title=Two-party_system&oldid=21594"
Categories: