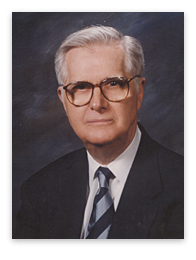 William Herbert Peterson (26 February 1921–June 2012) was the winner of the 2005 Gary G. Schlarbaum Award for Lifetime Achievement in the Cause of Human Liberty, awarded by the Mises Institute ($10,000 prize). [Prize Announcement] He served a crucial role as a leading public intellectual, elaborating on the insights of Mises through teaching, writing, and speaking on the relationship between free enterprise and human liberty.

Professor Peterson held B.S. (1943) and Ph.D. (1952) degrees in economics from New York University and an M.S. degree from Columbia University (1948). During World War II, he also studied at the Harvard Business School under Navy sponsorship and attended a summer leave seminar at Oxford University.

During his academic career, Peterson served as assistant to the dean, associate professor, and professor of economics in the Graduate School of Business Administration of New York University, where he was a colleague and friend of Ludwig von Mises; John David Campbell Professor of American Business in the American Graduate School of International Management in Arizona; Scott L. Probasco. Jr. Professor of Free Enterprise and Director, Center for Economic Education, the University of Tennessee at Chattanooga; Distinguished Burrows T. and Mabel L. Lundy Emeritus Professor of Business Philosophy, Campbell University in North Carolina; and Senior Fellow at the Heritage Foundation, where he continued to serve as Adjunct Scholar.

His experience in business and government included service as Economist and Assistant to the Chairman of the Finance Committee of the United States Steel Corporation, Senior Economic Advisor to the United States Department of Commerce, and economics speech writer on the campaign staff of Richard Nixon. Dr. Peterson served as a consultant for General Electric, General Motors, Republic of the Ivory Coast, Republic of South Vietnam, Time, Union Carbide, Manufacturers-Hanover Trust, and Southern Co., among others.

For fourteen years, he wrote a regular column for the Wall Street Journal entitled "Reading for Business." Apart from authoring monographs and books including The Great Farm Problem (1959), he contributed entries to McGraw-Hill's Encyclopedia of Economics (1982, 1992). He appeared as a guest commentator on the national PBS-TV show, "Nightly Business Report." He was a member of the "Brain Trust" contributing a column to the Investor's Business Daily.

In January 1979, Dr. Peterson was appointed to be a member of the Federal Drafting Committee of the National Tax-Limitation Committee. Led by Nobel Laureate economist Milton Friedman, this committee composed a draft of a constitutional amendment to limit the growth of the Federal budget.

In 1982, Dr. Peterson was sponsored by the U.S. Information Agency to lecture on supply-side economics in Rumania, East Germany, Ireland and Canada. For this effort, he won a letter of commendation from President Reagan.

In 1961, the McKinsey Foundation awarded first prize to Dr. Peterson for the best article of the year, "The Case for a North American Common Market," published in Indiana University's Business Horizons. In 1981, the Freedom Foundation at Valley Forge gave Dr. Peterson the Leavey Award for Excellence in Private Enterprise Education. In 1989, the Association of Private Enterprise Education named Dr. Peterson as Distinguished Scholar. In 1990, the Freedoms Foundation at Valley Forge awarded him the George Washington Medal of Honor. In 1991 he was awarded an honorary degree by Universidad Francisco Marroquin in Guatemala. In 1993, Campbell University conferred on him the Dean's Award for Excellence in Teaching.