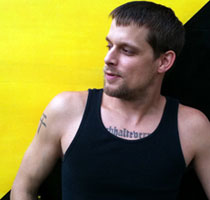 Ademo Voluntaryist Freeman, formerly known as Adam Mueller, is a libertarian activist who was convicted of felony wiretapping in 2012 for recording phone calls he made to on-duty government officials requesting comment concerning an incident of alleged police brutality. The questioning focused on video recorded by a student’s cell phone at Manchester High School West, which depicted Officer Darren Murphy slamming a 17-year-old boy into a cafeteria table in October of 2011. Although public officials told the student to delete the video,[1] it ended up in Freeman’s hands instead.

At Freeman's trial, the prosecutor, Michael Valentine invoked (without explicitly naming them) the rule of law and Kant's Categorical Imperative:[2]

Freeman rejected two plea agreements, went to trial, and was convicted on 13 August 2012. Freeman stated during his allocution:[3]

Freeman was sentenced to 12 months in prison, with 9 months suspended, conditional on 3 years of good behavior.[4] Julian Heicklen wrote that "the punishment is being invoked before the case is finally decided by the appeals court. Presumably if the appeal is successful, Ademo’s life on this earth will be extended by the court to compensate for the time served."[5]

In 2014, three of his five felonies were overturned by the appellate court.[6]

Freeman was born and raised in Wisconsin. He worked mostly in the industries of construction and factory work. In late 2001, he was arrested for conspiracy to distribute marijuana. It was a challenging time in his life and not only cost him friends but many of his liberties. After cooperating with the criminal justice system he put that incident behind him and started rebuilding his life. Yet he learned that his punishment was far from over.

Over the next few years Freeman ran into several statist laws that prevented him from moving on with his life, some of these being an attempt to get a liquor license, as a source to supplement his income. He also obtained his real estate license, which was then taken from him after some shady reporting by a local news source, which put the ax on his business plans with a friend to start a company. By this time Freeman was strongly questioning why he had lost his right to vote, own firearms, and work in several industries.

Then came his second arrest. It happened after the local police department entered his home on an extremely loose search warrant and found a small amount of cannabis. If this had been anyone else, besides a person with a prior felony, it would have been a misdemeanor offense. Instead Freeman was taken to jail and charged with his second felony. This is when Freeman lost all faith in the justice system. What crimes had really been committed? Where was the victim? And how much more could be taken from him?

It was while in jail for the second time that Freeman decided to simplify his life and live outside the system. He decided to sell his home, quit his job, and live as far under the radar as possible. His only goals and thoughts were to stay out of jail and away from the long arm of the law. Then came the housing bubble, bailouts, and corruption of just about every public official. In the last few years of the George W. Bush administration and the U.S. Presidential election of 2008 Freeman began to educate and involve himself in activism through various organizations and social networks. Within those outlets he began advocating self-education and involvement, hoping that with the experience and knowledge gained with Motorhome Diaries he would be more efficient in this quest. Later, through Cop Block, Freeman sought to expose the aggression committed by the government's armed thugs for what it is.

On 4 June 2011, a pro-police accountability rally was held outside the Manchester Police Department to draw attention to the dubious killing of resident James Breton and clearing of officers who savagely beat Christopher Micklovich. This resulted in the unjust arrest of eight and the seizure of nine cameras and phones (without the issuance of receipts). The rationale cited for the heavy police response was that some of those present had used children’s chalk to write on the sidewalk and building’s exterior walls, resulting in graffiti and criminal mischief charges, and that some were part of a group that didn’t move fast enough when pictures were being taken of “evidence” (chalked statements), resulting in disorderly conduct and resisting arrest charges.

On 31 August 2011, Freeman and Pete Eyre were arrested outside the Manchester Police Department, which forced them to delay their next tour. They relocated to Keene, New Hampshire. Eyre stated:[7]