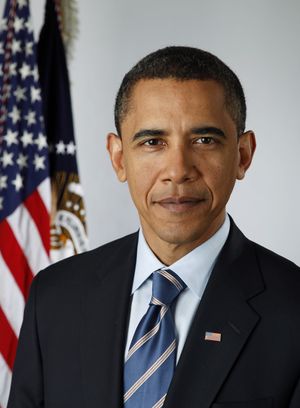 Barack Hussein Obama II (born August 4, 1961) is the 44th and current President of the United States of America.

On February 17, 2009 President Obama signed the American Recovery and Reinvestment Act of 2009, a $787 billion fiscal stimulus attempt including $140 billion in tax credits, $87 billion to help states with Medicaid, $70 billion to prevent use of the alternative minimum tax, $55 billion to pay for state education costs, $47 billion in unemployment benefit extensions, and $40 billion to subsidize health care insurance. The Act's statement of purposes included "To preserve and create jobs and promote economic recovery," "to assist those most impacted by the recession," "to provide investments needed to increase economic efficiency by spurring technological advances in science and health," "to invest in transportation, environmental protection, and other infrastructure that will provide long-term economic benefits," and "to stabilize State and local government budgets, in order to minimize and avoid reductions in essential services and counterproductive state and local tax increases." After its passage, real GDP numbers showed little improvement while the federal deficit grew from 3.2% of GDP to 9.9%. The federal deficit was the largest since 1945, the last year of World War II.

On March 23, 2010 President Obama signed the Patient Protection and Affordable Care Act, an act intended to subsidize premiums for the health insurance of most Americans starting January 1, 2014.

This article is a stub. You can help Mises Wiki by expanding it.
Retrieved from "https://wiki.mises.org/mediawiki/index.php?title=Barack_Obama&oldid=29832"
Categories: