Bitcoin is an open source peer-to-peer system developed by Satoshi Nakamoto that aims to provide electronic cash. The system has no central server or trusted parties.[1] Bitcoin relies on cryptographic principles to create unique, unreproducible, and divisible tokens. Users hold the cryptographic keys to their own tokens and transact directly with each other, with the help of the network to check for double-spending.[2] 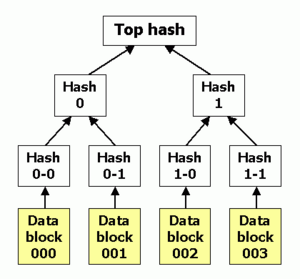 Bitcoin is an implementation of Wei Dai's b-money proposal on Cypherpunks in 1998 and Nick Szabo's Bitgold proposal.[3] The principles of the system are described in the Bitcoin White Paper.[4]

A user on the network has one or several cryptographic identifiers (ECDSA keypairs), which represent their wallet. The public key counterpart of this wallet is called an address. The private key, stored only on the user's computer, is used to authorize payments from the user. The wallet or address contain no information about their owner, so they are effectively anonymous.[5]

Each coin of the Bitcoin system has its owner's public key on it. The owner can transfer it further by adding the recipient's public key on it, signing it with his private key and broadcasting the transaction to the network. This way, each coin contains its cryptographic ownership history from the creator of the coin to its current owner.

To prevent users from double-spending their coins (signing the same coin for many recipients), transactions are timestamped by the network with a proof-of-work system. The network collects and records new transactions into a chain of blocks. Nodes of the network are constantly racing to complete these blocks by finding a value, that summed up with the block and the hash of the previous block, produces an SHA-256 hash containing a certain amount of leading zero bits. The average work required by this operation can be calculated and used to timestamp the block's transactions, so that they cannot be invalidated by later double-spending.

The incentive to use CPU time for running the system is that new coins are created and assigned to the node that manages to complete the new block first. This method of coin creation "was designed to be a digital analogue to gold and silver mining"[6]. Once a node successfully creates a block, it broadcasts the block to the network. Other nodes receive the block, perform a proof-of-work check, and add it to their chain if it is valid. As more transactions occur, blocks are created and added ad infinitum. The longest proof-of-work block chain is acknowledged to be the oldest and most reliable account of the transaction history.

This mechanism is claimed[4] to be virtually tamper-proof. For an attacker to manipulate the record, he must outpace all of the other nodes on the network to produce the longest proof-of-work. This becomes exponentially more difficult as time passes, because such "tampered" chains would continuously be rejected by nodes attempting to build a valid chain.

Bitcoin is a completely peer-to-peer network, and every node is able to enter or leave the network at will. When a node joins the network, the longest proof-of-work is automatically accepted as the most reliable one.

The average rate of Bitcoin production is tapered such that over time the total number of Bitcoins will approach 21,000,000. After this point, no further Bitcoin production is possible. In this environment of limited supply and in situations where large numbers of Bitcoins are either lost or destroyed, the electronic divisibility of Bitcoins is argued to be conducive to downward price adjustments with no practical limitations in the actual storage or transport of Bitcoin value.[7] Rather than relying on the incentive of newly created Bitcoins to package transactions, nodes in this period will likely depend more heavily on their ability to competitively collect transaction fees to process Bitcoin transactions into blocks.[8]

Given the decentralized nature of Bitcoin and the hard coding of rules within the software, potential users claim various monetary and financial benefits[9]:

According to the author, the design also supports a variety of possible transaction types that have yet to be implemented within the currently available client. These include escrow transactions, surety bond contracts, third party arbitration, and multi-party signatures.[10]