This article uses content from the Wikipedia article on Boston Tea Party (edition) under the terms of the CC-by-SA 3.0 license. 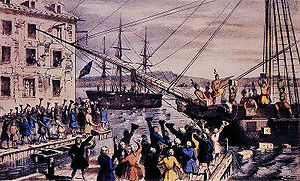 "The Destruction of Tea at Boston Harbor"

The Boston Tea Party was a direct action by colonists in Boston, a town in the British colony of Massachusetts, against the British government and the monopolistic East India Company that controlled all the tea coming into the colonies. On December 16, 1773, after officials in Boston refused to return three shiploads of taxed tea to Britain, a group of colonists boarded the ships and destroyed the tea by throwing it into Boston Harbor. The incident remains an iconic event of American history, and other political protests often refer to it.

The Tea Party was the culmination of a resistance movement throughout British America against the Tea Act, which had been passed by the British Parliament in 1773. Colonists objected to the Tea Act for a variety of reasons, especially because they believed that it violated their right to be taxed only by their own elected representatives. Protesters had successfully prevented the unloading of taxed tea in three other colonies, but in Boston, embattled Royal Governor Thomas Hutchinson refused to allow the tea to be returned to Britain. He apparently did not expect that the protestors would choose to destroy the tea rather than concede the authority of a legislature in which they were not directly represented.

The Boston Tea Party was a key event in the growth of the American Revolution. Parliament responded in 1774 with the Coercive Acts, which, among other provisions, closed Boston's commerce until the British East India Company had been repaid for the destroyed tea. Colonists in turn responded to the Coercive Acts with additional acts of protest, and by convening the First Continental Congress, which petitioned the British monarch for repeal of the acts and coordinated colonial resistance to them. The crisis escalated, and the American Revolutionary War began near Boston in 1775.