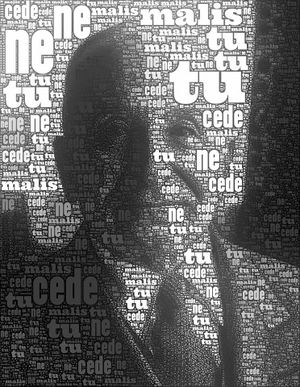 Is it truly a good idea to proceed ever more boldly against evil? Either one must become bolder by some pretty small increments, or at pretty small intervals; or one must eventually get as bold as one possibly can.

The concept of cowardice should probably be deprecated, because really what it boils down to is having a certain set of priorities and a certain level of risk averseness that cannot necessarily be objectively proven better or worse than someone else's. For example, suppose you are a soldier and your primary goal is to win the battle and your secondary goal is to survive. And suppose the importance you attach to that first goal is 100 points, and the importance you attach to that second goal is 50 points. And suppose you realize that by jumping up and running across no-man's-land, you can increase your odds of winning the battle by 4 percent, while decreasing your odds of survival by 3 percent. You will choose to not run across no man's land, because it's not worth the risk to survival. However, if it would increase your odds of winning the battle by 7 percent, then you would run across no-man's-land.

What it means to be courageous

Often, men in particular will take offense at being called "chicken" because it seems to call into question their masculinity. But everyone has his own scale of values that determines what risks he deems worth taking for what rewards. Nor is it necessarily desirable that everyone be willing to take risks; it might be beneficial to have a few conservative folk. E.g., when others are risking their fortunes on tech stocks, maybe it is good that there is someone who puts his money into certificates of deposit instead. Those who have something to gain by his investing in those tech stocks may call him "chicken" in order to manipulate him into changing his behavior, but there is not really any reason to accept that judgment as valid or important.

Probably there evolved a tendency for men to err on the side of risk-taking and women to err on the side of caution for sociobiological reasons. Specifically, females being a bottleneck of reproductive capacity in a polygynous species, it is expedient that risk-taking be done primarily by males, from a standpoint of a societal goal of maintaining and increasing population. The individual male has more than an individual female to gain by risk-taking in such circumstances.

The risks involved in not taking a risk

After all, not taking a particular risk can also be risky. The soldier who declines to attack when the opportunity presents itself risks giving the enemy a chance to regroup and launch a counteroffensive. The investor who refuses to buy tech stocks risks being left much poorer than those who did invest. And so on. Indeed, giving in to pressure to take a risk out of fear that someone will call him "chicken" could, itself, be viewed as a form of cowardice because the person is unwilling to risk social disapproval.

Discretion as the better part of valor

The expression might be better stated, "It is useful to exercise discretion as to when one should demonstrate valor." Risk-taking that results in unwanted outcomes tends to exhaust one's resources, so it is impossible to take all the available risks. For example, one's ability to purchase more shares on the stock market is diminished if one haphazardly makes indiscriminate investment choices that deplete one's fortune. However, one might increase one's ability to purchase more shares by taking prudent risks that increase one's fortune.