From Mises Wiki, the global repository of classical-liberal thought
Jump to: navigation, search
This article is a stub. You can help Mises Wiki by expanding it. 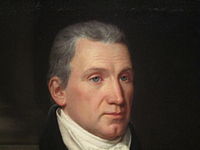 Monroe as he appears in the National Portrait Gallery in Washington, D.C.

James Monroe (28 April 1758–4 July 1831) was the fifth President of the United States (1817–1825). Monroe was the last president who was a Founding Father of the United States, and the last president from the Virginia dynasty and the Republican Generation.[1] His presidency was marked both by an "Era of Good Feelings" – a period of relatively little partisan strife – and later by the Panic of 1819 and a fierce national debate over the admission of the Missouri Territory. Monroe is most noted for his proclamation of the Monroe Doctrine in 1823, which stated that the United States would not tolerate further European intervention in the Americas.