This article uses content from the Wikipedia article on Peter Schiff under the terms of the CC-by-SA 3.0 license. 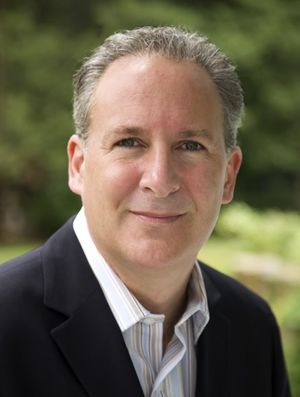 Peter David Schiff (born March 23, 1963) is an American businessman, author, financial commentator, and a former 2010 Republican primary candidate for the United States Senate.[1] He and his brother Andrew Schiff are the sons of Irwin Schiff, a notable tax protester serving a prison sentence for his convictions.

Schiff is president and chief global strategist of Euro Pacific Capital Inc., a broker-dealer based in Westport, Connecticut.[2] Schiff frequently appears as a guest on CNBC, Fox News, and Bloomberg Television and is often quoted in major financial publications[3][4][5] as well as the former host of the podcast Wall Street Unspun[6] and the current host of the radio show The Peter Schiff Show.

He is known for his bearish views on the dollar and dollar denominated assets, while bullish on investment in tangible assets, as well as foreign stocks and currencies.

Schiff's notoriety for financial predictions increased when a You tube video entitled "Peter Schiff was right" became popular in late 2008 and 2009.[7][8] The video consists of a compilation of clips of his many appearances on various financial news programs from networks including CNBC, Fox News, MSNBC and Bloomberg, most of which took place from 2005 to 2007. In the segments Schiff explains specifically the fundamental problems he saw with the United States economy at that time. Schiff's warnings of a coming economic collapse earned him the moniker "Dr. Doom."[9][10]

In late 2006, Schiff predicted the housing bubble and resulting subprime mortgage crisis,[11] and in late 2008, he predicted the automotive industry crisis and the crisis in the banking and financial markets.[10][12][13] Schiff does weekly video blogs on youtube which are closely followed by over 30,000 subscribers. His videos can usually receive 45,000 views within a week's time. He hosted a weekly radio show, Wall Street Unspun, that was streamed on the web for more than five years. In October 2010, he replaced it with a daily two hour radio show called The Peter Schiff Show, which is broadcast online and at a couple of Connecticut radio stations. He eventually plans to syndicate the show nationwide.

Peter Schiff is the author of four books published by John Wiley and Sons. His book, Crash Proof 2.0, appeared on both the New York Times and Wall Street Journals bestseller lists.