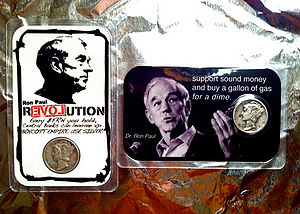 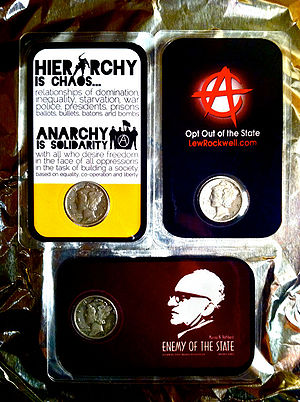 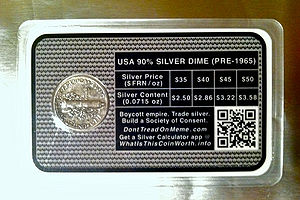 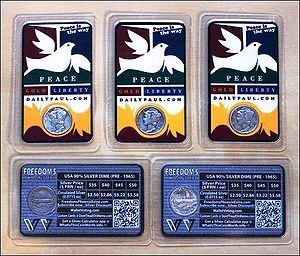 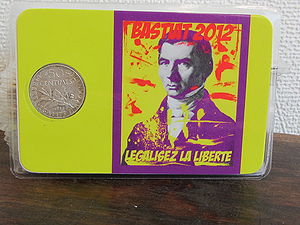 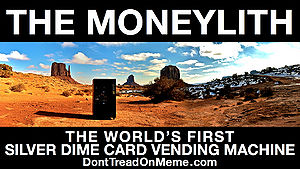 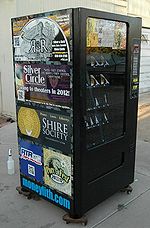 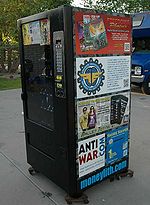 A Silver Dime Card is an Alternative Currency consisting of one 90% Silver Dime (United States coin) laminated within a credit-card sized plastic sleeve. The dime is accompanied by a paper insert often printed with graphics on the front and a conversion table on the back. The table is intended as a suggestion, to aid the holder in converting the price of bartered goods between Federal Reserve Notes and the amount of silver within the card. Owing to the popularity and utility of the card, they often trade at values higher than the silver spot price.

Wallet Voting began producing Silver Dime [and Quarter] Cards in 2010[1] to provide a smaller-valued unit to compliment the rise of precious metal barter and to create a convenient educational tool for Austrian School concepts such as Gresham's Law, Inflation, and Subjective Theory of Value. They were influenced by innovators such as Shire Silver, American Open Currency Standard, Del Valley Silver, and Silver Circle movie project, with whom they have found the cards to be a valuable marketing tool for the upcoming film and tenth-ounce silver rounds.

Of particular influence to the Silver Dime Card project was the Liberty Dollar, from whose prosecution the risks of advertising a new coin as "current money" with a face value became evident[2]. For those reasons the Silver Dime Card was judged to be safer from legal challenge because it utilizes a Legal Tender coin and does not claim a certain value-in-trade. They observed that if it were illegal to mint a coin resembling US Currency, one might as well simply use the original coin but in imaginative ways. It has been suggested that trading in these pre-1965 "junk" coins allows the transaction to be reported at a face value significantly less than market value.

In 2011 the What is This Coin Worth? project created a mobile app named "Silver Calculator" for Android and iPhone. It was conceived as a point-of-sale, live-update interface for precious metal barter. It has been continually updated to include international and nongovernmental coins and it has over 6,000 downloads. Multi-lingual versions are planned.

One of the first large-scale tests for the Silver Calculator App was in aiding vendors at the Free State Project's annual Porcupine Freedom Festival in June, 2011.[3]

The original Silver Dime Cards soon incorporated a link to the WITCW app by adding a QR code, and it is the signature feature included to this day as both a technical and quality control tool.

The marketing effort Don't Tread On Meme began at Libertopia in November, 2011, when the founders of the projects Wallet Voting, What Is This Coin Worth?, and Once Upon A Dime noticed a vendor selling shirts with the traditional Gadsen Flag snake and phrase, "Don't Tread on Me - or Anyone." They observed that this emphasis for compassion and mutual respect had the power to better market the advantages of libertarianism to the general public, and that by twisting the format of a familiar icon it could be made to once again grab the eye. This stirred them to experiment with fresh branding for the liberty movement, in what would later become T-shirts, hoodies, and yoga shirts composed of cryptic stencils of subversive freedom themes and scannable QR codes. After observing the rapid pace at which the sylish Silver Dime Cards had taken on a collectible status within liberty subcultures, they concluded that the barter movement had become a 'meme,' as would later be explained in their radio advertisements:

A meme, a contagious idea that spreads within a culture. Nowhere is this more evident than in one's free choice in that most marketable of commodities: Money. Let us Austrians use Wallet Voting!...Don't Tread On Meme - fashioning the silver economy.[4]

The Silver Dime Card project found early support[1] on the live syndicated radio show Declare Your Independence with Ernest Hancock. Hancock recognized the potential of the cards to extend the discussion of honest money beyond electoral politcs and supported Wallet Voting as a "Craigslist" for silver barter in the same style as Agorist Marketplace.[5]

Commercials aired during the show are narrated by Phoenix radio veteran Charles Goyette, author of Austrian-themed books The Dollar Meltdown and Red and Blue and Broke All Over. Don't Tread On Meme's tagline reflects the subversive spirit of barter culture: You can audit The Fed, You can end The Fed, but why not start by ignoring The Fed?[4]

Within one year others were inspired to build upon the model. In March 2012, Freedom's Phoenix created and sold over 5,000[6] Silver Dime Cards to raise funds for the website The Daily Paul. Subsequent fundraisers are planned.

To further promote the concept of silver as an affordable and accessible barter money, Don't Tread On Meme purchased a vending machine in January 2012 with the sponsorship of silver dealers Roberts & Roberts Brokerage, Inc., along with Freedom's Phoenix, Silver Circe, The Shire Society, Freedom Engineering, Shire Silver, Porcfest 2012, RTR.org, and Antiwar.com. The machine became a prop for economic and political "street theater" at events such as Ron Paul campaign appearances and liberty conferences. Due to the black monolithic appearance and its purpose as a "sentinel" for economic evolution, it became the inspiration for a web-based featurette film 2012: A Silver Odyssey written as an allegory to the film 2001: A Space Odyssey.