This article uses content from the Wikipedia article on The Libertarian Forum under the terms of the CC-by-SA 3.0 license. 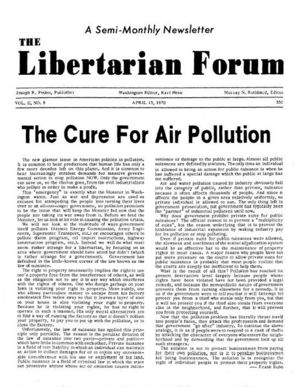 The Libertarian Forum was a market anarchist journal published about twice a month from 1969 to 1984. Its main author was Murray Rothbard, who was an editor along with Karl Hess. Currently all the issues are available in the recopilatory book The Complete Libertarian Forum 1969-1984.

Template:Libertarianism sidebar The Libertarian Forum was created in 1969 after the demise of Left and Right: A Journal of Libertarian Thought, for support anarcho-capitalism. The focus of the journal was on "substantive theoretical contributions, commentaries on politics, details of disputes and arguments within the libertarian movement, and forecasts on the future of liberty."[1] The original publisher was Joseph R. Peden.

The Libertarian Forum published several early incarnations of essays that would later be included as chapters in Walter Block's Defending the Undefendable.

According to the journal,

After we had launched The Libertarian, we discovered that a monthly mimeographed periodical with the same name emanating from New Jersey had been publishing for several years. To avoid confusion with this publication, we are hereby changing our name to The Libertarian Forum; no change is involved in policy or format.