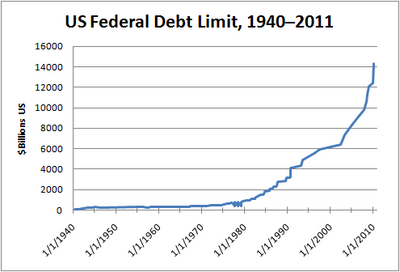 The United States debt limit, or debt ceiling, is a statutory limitation on the amount of outstanding debt of the United States federal government. The limit applies to nearly all federal debt, including debt held by the public and debt held by government accounts (such as federal trust funds like Social Security).[1] As of August, 19th, 2011, the total public debt was at $14.6 trillion.[2]

The federal debt limit was instituted by the Second Liberty Bond Act of 1917 (P.L. 65-43, 40 Stat. 288), enacted Sept. 24, 1917 in order to finance US entry into World War I. The US Treasury had taken out loans prior to this, for specific purposes like the construction of the Panama Canal, but the aggregate debt limit gave the Treasury greater control over its debt.[3]

After the war, it was reduced to $275 billion and held there until 1954. Between 1954 and 1962 it was modified nine times, and returned to $300 billion in March 1962. Since 1962, the debt limit has been modified dozens of times, generally increasing by small percentage amounts each time.[5]