This article uses content from the Wikipedia article on William Harold Hutt (edition) under the terms of the CC-by-SA 3.0 license. 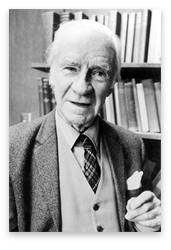 William Harold "Bill" Hutt (August 3, 1899 – June 19, 1988) was an English economist who described himself as a classical liberal, although some identify him more closely with the Austrian School.[1]

Hutt was born into a working-class, but educated family in London, where his father was a compositor. After he completed high school during the height of the First World War, young Bill began training as a pilot, but was forced to abandon his training with the end of the war.[2]

Hutt attended the London School of Economics (LSE) where he earned a Bachelor of Commerce degree under the "leading influence" of Edwin Cannan.[1] After his 1924 graduation from LSE, Hutt worked for a publisher until 1927. It was during this period that Hutt wrote his first published essay, entitled "The Factory System of the Early Nineteenth Century" (1925).

Rather than wholly removing himself from academia upon the completion of his undergraduate degree, Hutt remained immersed in the LSE culture, attending LSE classes informally until March 1928, when he accepted a position as senior lecturer at the University of Cape Town (UCT), South Africa. In 1930, Hutt was promoted to "Chair of Commerce" at UCT. Later, Hutt would be named "Dean of the Faculty of Commerce."[1]

In his writings on collective bargaining, including his first book, The Theory of Collective Bargaining (1930), Hutt disputed the commonly held position that labor was at a disadvantage in bargaining with employers, an idea which some had used to justify organized violence by trade unions.[2] He also argued against the idea that the labor market consists of a "bilateral monopoly."[1] Although Hutt argued vehemently against what he considered to be injustices committed by trade unions, he did not advocate their outright abolition. According to Australian writer Rafe Champion, Hutt believed that,

[Unions] had (and have) many useful functions in addition to acting as friendly societies for health and welfare provision. They could help their members to improve their qualifications and locate the best paid work, and they could provide assistance to members subjected to unfair treatment by management.[2]

Hutt later became known as a leading voice in the academic community condemning South African apartheid.[3] He vehemently objected to the policy, arguing in his 1964 critique that it was little more than a means by which white labor unions used the government to outlaw black competition.[4]

He was a member of the Mont Pelerin Society. Hutt's work has been notably praised by George Selgin and Nobel laureate James M. Buchanan.[1]

In his 1936 book "Economists and the Public" he coined the now famous concept "consumer sovereignty".