This article uses content from the Wikipedia article on Lew Rockwell under the terms of the CC-by-SA 3.0 license. 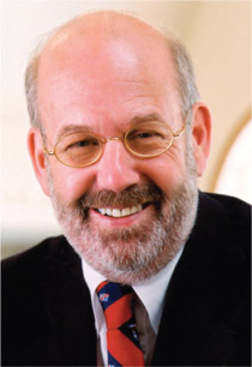 Rockwell was born in Boston, Massachusetts in 1944. His father was a "Taft Republican", and Rockwell was exposed at a young age to military non-interventionism.[1] He was introduced to the laissez faire thought of the French Liberal and Austrian schools of economics when he received Henry Hazlitt's Economics in One Lesson as a gift from a family friend on his twelfth birthday.[1] Later in his youth, Rockwell describes feeling alienated from mainstream conservatism,

"Over time, I became aware that I was not only dissenting from the left but also from the conservative establishment, which was embroiled in the Cold War as a first principle. I grew increasingly skeptical of the official right, especially during the war on Vietnam.... I had been a reluctant Goldwaterite in 1964, but by 1968 I worked briefly for Gene McCarthy."[1]

After college, Rockwell went to work for Neil McCaffrey's Arlington House publishing company which had been founded in 1965. At Arlington House, Rockwell worked as an editor on books by authors including Bill Rickenbacker, Harry Browne, George Roche, and Henry Hazlitt.[1] It was at Arlington House that Rockwell became acquainted with the works of Ludwig von Mises.[1]

"He applied Read's strategy when he launched Imprimis for Hillsdale College. The president of Hillsdale, George Roche, had worked for Read until he became president at Hillsdale in 1971. (I replaced Roche at FEE.) He wanted The Freeman for Hillsdale, but of course could not get it. So, he hired Rockwell to start Imprimis. Hillsdale gives the newsletter away. As with The Freeman, the letter is based on ideas, not appeals for donations. This became the most financially successful fund-raising newsletter in history, raising several hundred million dollars for Hillsdale. It now has over 1.7 million subscribers. It is the college's lifeline." [3]

Rockwell met Murray Rothbard for the first time in 1975, while working for Hillsdale. Rockwell credits Rothbard with convincing him to wholly reject statism:

"It was clear to me at the time that Murray Rothbard was Mises's successor, and I followed his writings carefully. I first met him in 1975, and knew immediately that he was a kindred spirit.... I cannot remember the day that I finally came around to the position that the state is unnecessary and destructive by its nature – that it cannot improve on, and indeed only destroys, the social and economic system that grows out of property rights, exchange, and natural social authority – but I do know that it was Rothbard who finally convinced me to take this last step." [1]

Rockwell served as Ron Paul's congressional chief of staff from 1978 to 1982.[4][5] He has maintained a working relationship with Paul over the years, as a contributing editor to "The Ron Paul Investment Letter";[6] as a consultant to Paul's 1988 Libertarian Party campaign for President of the United States;[7] and as vice-chair of the exploratory committee for Paul's spirited run for the 1992 Republican Party nomination for president.[8]

In 1982, Rockwell founded the Mises Institute in Auburn, Alabama and was its president until the summer of 2009, when he transitioned to the position of Chairman of the Board.[9] He also is Vice President of the Center for Libertarian Studies in Burlingame, California and publisher of the political weblog LewRockwell.com. Rockwell was closely associated with his teacher and colleague Murray Rothbard until Rothbard's death in 1995. Rockwell's political ideology, like Rothbard's in his later years, combines a form of anarcho-capitalism with cultural conservatism and the Austrian School of economics. He also advocates federalist concepts as a means of promoting freedom from central government, and also advocates secession for the same political decentralist reasons. Rockwell has called environmentalism "[a]n ideology as pitiless and Messianic as Marxism."[10]

The Mises Institute published Rockwell's Speaking of Liberty, an anthology of editorials which were originally published on his website, along with transcripts from some of his speaking engagements. Rockwell and the Ludwig von Mises Institute together publish the Journal of Libertarian Studies. 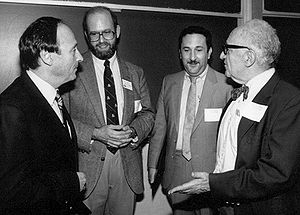 In 1985, he was named a contributing editor to Conservative Digest.[11] During the 1990s Rothbard, Rockwell and others described their views as paleolibertarian,[12] but Rockwell no longer uses the term to describe his ideas.[13] Jean Hardisty, founder of Political Research Associates, wrote in 1999 that Rockwell was one of the most influential proponents of the paleoconservative faction of "right-wing libertarianism."[14]

Lew Rockwell's web site features a selection of articles, including opposition to war and imperialism along with occasional articles criticizing the presidency of Abraham Lincoln.[15] The site also carries essays which argue against the participation of the United States in the Second World War, speculation about an end of the United States as a cohesive union and assertions the Western world is threatened by an intersection of fascism and socialism alike as politicians and states centralize their power.[16][17][18] These writings are sometimes controversial and have brought harsh criticism from some on the political right.[19][20] His web site also provides podcasts featuring Rockwell's interviews of various scholars and writers, including many affiliated with the Mises Institute.