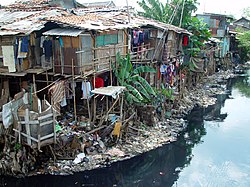 An example of urban poverty in this slum in Jakarta, Indonesia

Poverty is the state of one who lacks a usual or socially acceptable amount of money or material possessions. For most of history poverty had been accepted as inevitable as traditional modes of production were insufficient to give an entire population a comfortable standard of living.[1] People who practise asceticism intentionally live in economic poverty so as to attain spiritual wealth.

Poverty is relative to, and is the antonym of, wealth.

Classical liberalism has had a long engagement with the issue of poverty, partly because of its intimate association with economic science in particular and the study of spontaneous forms of social order and improvement in general. Classical liberals have insisted that the question of the "wealth of nations" comes logically before "the poverty of nations." Poverty is meaningful only in comparison to wealth, and wealth must be produced. Poverty is the natural base line against which wealth is measured; poverty is what you have if wealth is not produced. As the historians Nathan Rosenberg and L. E. Birdzell Jr. put the matter, "If we take the long view of human history and judge the economic lives of our ancestors by modern standards, it is a story of almost unrelieved wretchedness." Widespread poverty is the historical norm; the wealth explosion of the past two centuries is the aberration that requires explanation.

Prosperity, as it is understood today, is a uniquely modern phenomenon. The experience of the great bulk of the human race for most of its existence, up until quite recently, has been the experience of early death, sickness, ignorance, almost unrelieved physical toil, and uncertain access to sufficient food to sustain life.

Almost all humans have escaped the Stone Age. In those countries that saw increases in per capita income, the effect was especially significant for the poor, whose status and even definition changed dramatically. As Carlo Cipolla noted of the impact of the "Industrial Revolution," it is undeniable that one of the main characteristics of preindustrial Europe, as of all traditional agricultural societies, was a striking contrast between the abject misery of the mass and the affluence and magnificence of a limited number of the very rich. "The poor" referred to people on the verge of starvation:

The great growth of industry made the poor—in the form of large numbers of urban workers—visible to literate urban dwellers in a way that they had not been before. But no longer were they swarming masses of starving peasants hoping for alms. Their status was decidedly different. The increases in population made possible by industrialism did not arise from an increase in birth rates but from a drop in death rates, notably premature death. "If we ask," F. A. Hayek wrote, "what men most owe to the moral practices of those called capitalists the answer is: their very lives. Socialist accounts that ascribe the existence of the proletariat to an exploitation of groups formerly able to maintain themselves are entirely fictional. Most individuals who now make up the proletariat could not have existed before others provided them with means to exist."

There is no naturally discernible dividing line between "poverty" and "wealth." The poor of today enjoy amenities unavailable to the wealthy of the past, even the relatively recent past. (If anyone doubts that, he or she should compare the experience of dentistry among the super wealthy fifty years ago with that of the poor in advanced countries today; who could doubt that the wealthy of the past would have given their eye teeth, so to speak, to enjoy the anesthesia and modern dental techniques available to even the poorest in industrial countries today?)

Adam Smith’s book was famously called An Inquiry into the Nature and Causes of the Wealth of Nations. Most prior writers had identified the wealth of a nation (its nature) with the wealth of the ruling elite. In contrast, Smith began his work by identifying the nature of a nation’s wealth, not with its military power or the gold and silver in the king’s treasury, but with the annual produce of the combined labor power of the nation, divided by the number of consumers, a conception that persists in the modern notion of per capita gross domestic product.

The wealth of a nation is to be measured, then, not by the power of its rulers or the bullion in the state treasury, but by the access to wealth on the part of any randomly chosen member of it: "That state is properly opulent in which opulence is easily come at, or in which a little labour, properly and judiciously employed, is capable of procuring any man a great abundance of all the necessaries and conveniencies of life." The primary causes or determinants of wealth are the institutions that create incentives for wealth production. Poverty, then, as measured against a background of wealth, represents a failure to create (or hold on to) wealth, and the causes of such failure are those institutions or practices that create disincentives for wealth production and/or incentives for predatory transfers that directly impoverish some for the benefit of others.

In classical liberal thought, helping the poor should be done via self-help, mutual aid and charity - in that order. The freedom to exercise one’s talents led to the improvement of the lot of the oppressed, of the have-nots, of the disadvantaged, of the poor. Self-help was promoted by the elimination of obstacles to self-help and the active assertion of personal responsibility. Classical liberals actively promoted and took part in a variety of "friendly societies," "fraternal societies," and "mutual-aid societies" that pooled both the efforts and the risks faced by persons of limited means. Charity assisted those who have fallen on hard luck or who need assistance from others, which is best provided by voluntary associations. The key for classical liberals was to avoid conditions of permanent dependence. Thus, Bernard Bosanquet, a stalwart of the Charity Organisation Society in Great Britain, was deeply critical of the institutionalization of poverty, of seeing "the institution of 'the poor' as a class, representing, as an ethical idea in the modern mind, a permanent object of compassion and self-sacrifice. 'Poverty,' it has been said, 'has become a status.' The 'déclassés' have become a social class, with the passive social function of stimulating the goodness of others." The purpose of charity was not to further dependency but to foster the ability of the recipients of charity to take care of themselves and their families. Bosanquet argued that economic socialism, based on commands and central planning, would produce selfishness, while voluntary cooperation would produce respect for others and fellow feeling.

Compulsory assistance was associated in the minds of classical liberals not only with condescension but with systems of paternalistic control and loss of independence and liberty. The experience of the Poor Laws and the associated controls of behavior were still vivid memories for the liberals of the nineteenth and twentieth centuries.

A major concern about compulsory redistribution that was central to the critique of the Poor Laws and continues to this day in debates on welfare policy and "foreign aid" is whether such state measures actually improve the well-being of the poor, or merely make those who advocate them feel good about themselves, as if they had discharged a moral obligation, not by helping others but by advocating policies. For most classical liberals, consequences, and not merely stated intentions, matter in the evaluation of policies. Thus, the question of whether state aid resting on compulsion in fact represents an improvement for the poor has always been a central concern of classical liberals when addressing plans of redistribution.[2]