This article uses content from the Wikipedia article on Robert Higgs under the terms of the CC-by-SA 3.0 license. 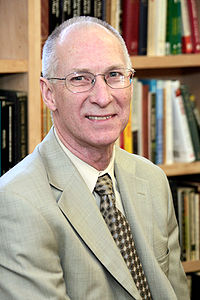 Robert Higgs (born 1 February 1944) is an American economic historian, economist of the Austrian School, and a libertarian anarchist. His writings in economics and economic history have most often focused on the causes, means, and effects of government growth.

He is a Senior Fellow in Political Economy at the Independent Institute (since September 1994), and is editor of Independent Review (since 1995).[1] He is an adjunct faculty member of the Ludwig von Mises Institute[2] and is an adjunct scholar at the Cato Institute.[3] Higgs is also a contributor to LewRockwell.com.[4]

Daniel McCarthy praised Higgs and summarized his ratchet effect theory in a review of Against Leviathan that appeared in The American Conservative. In the review, McCarthy remarked that,

What made Crisis and Leviathan a milestone was the rigor with which it elaborated upon the logic of James Madison's 1794 warning against "the old trick of turning every contingency into a resource for accumulating force in government." Other political economists had studied the growth of state power during times of war, depression, and general upheaval before, but none had done so as thoughtfully and thoroughly as Higgs. He took special care in describing the "ratchet effect" — once a crisis has passed state power usually recedes again, but it rarely returns to its original levels; thus each emergency leaves the scope of government at least a little wider than before.[6]

Jörg Guido Hülsmann,[7] Joseph Salerno,[8] Lew Rockwell,[9] and other scholars have discussed the Higgs Ratchet Effect in their writings.

A vehement critic of the Iraq war, Higgs wrote in the Los Angeles Chronicle in February 2008 that only a high toll in casualties or economic hardship will end the Iraqi war, not cogent arguments. Higgs continued:

It follows directly that up to this point the continued prosecution of the war has served the leaders' interests. They may say they are trying to end the war. They may have secured their election or reelection, as many of the Democrats now serving in Congress have, by promising to do whatever they can to end the war. Yet the truth is that they've sold the public a bill of goods. When the leaders have considered all the personal consequences they expect to follow from acting to end the war, they have concluded that, all things being considered, doing so does not serve their interest, and therefore they have refrained from doing so.[10]

[t]he failure of Fannie Mae and Freddie Mac, setting in motion the biggest government bailout/takeover in U.S. history, brings a grim sense of fulfillment to competent economists.... Our political economy is rife with such catastrophes in waiting, yet the public always seems startled, and outraged, when the day of reckoning can no longer be deferred, and another apartment collapses in the state’s Hotel of Impossible Promises, loading onto the taxpayers more visibly the burden of sheltering the previous occupants.... Call it democracy in action or utterly corrupt governance; they are the same thing.[11]

The article was praised and quoted on-air by several talk radio personalities, with WBEN Buffalo's Tom Bauerle stating that it was one of his favorite "all-time articles."[12][13]

The concept of regime uncertainty describes uncertainty of investors in their private property rights in their capital and the income it yields because of government action.[14]