This article uses content from the Wikipedia article on Roderick Long under the terms of the CC-by-SA 3.0 license. 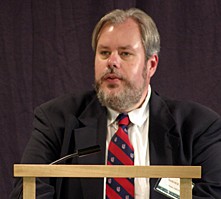 Roderick Tracy Long (born February 4, 1964) is a professor of philosophy at Auburn University and libertarian anarchist blogger. He also serves as a senior scholar for the Ludwig von Mises Institute, an editor of the Journal of Ayn Rand Studies, director and president of the Molinari Institute, and an advisory panel member for the Center for a Stateless Society. He received a B.A. in philosophy from Harvard University and his Ph.D. from Cornell University. He has edited the book Anarchism/Minarchism: Is a Government Part of a Free Country?. His work has been debated by Robert Bidinotto[1] and cited by Gene Callahan.[2] Long served as the editor of the Journal of Libertarian Studies and was a member of the Liberty and Power group blog.

According to Long, he specializes in "Greek philosophy; moral psychology; ethics; philosophy of social science; and political philosophy (with an emphasis on libertarian/anarchist theory)."[3] Long supports what he calls "libertarian anarchy",[4] but avoids describing this as "capitalism", a term he believes has inconsistent and confusing meanings.[5]