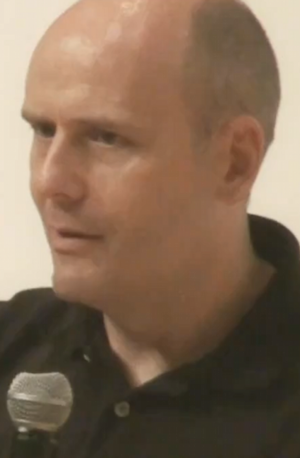 Stefan Molyneux (born 24 September 1966) is a Canadian philosopher, blogger, essayist, author, and host of the Freedomain Radio[1] series of podcasts, living in Mississauga, Canada. He has written numerous articles and smaller essays which have been published on libertarian websites such as LewRockwell.com, antiwar.com and Strike The Root[2], recorded over 1700 podcasts, produced over 500 videos, and written numerous books which are all self-published except for his first, which was published by Publish America. In 2006 Stefan Molyneux quit his previous job in the field of computer software and works full-time on Freedomain Radio, a philosophical community website which is funded through voluntary donations.

Freedomain Radio is primarily an online podcast, however Molyneux also uses essays, videos, books, articles, interviews, and public speaking to deliver his content. The regular content of the show covers topics such as anarchism, ethics, Austrian economics, atheism, religion, education, family, and politics. Each Sunday Molyneux conducts a call-in show where listeners can talk with him about either a set topic of discussion, or their own. Freedomain Radio also has an online community message board for listeners to discuss Molyneux's content as well as related topics.

Stefan Molyneux is the author of several non-fiction books. He has written On Truth, Universally Preferable Behaviour, Real-Time Relationships, Everyday Anarchy, Practical Anarchy, Achieving Freedom[3], and Against The Gods?. Molyneux has also written two fictional books, The God of Atheists and Revolutions.

Stefan Molyneux was the closing speaker for the 2009 New Hampshire Liberty Forum on March 8.[16][17] The position was taken by Ron Paul in 2008 and John Stossel in 2007. Molyneux debated with 2004 US Presidential Candidate Michael Badnarik at Drexel University on July 5, 2009.[18][19] Molyneux was the opening speaker for PorcFest 2010 on June 24[20][21], the annual liberty festival organized by the Free State Project. Molyneux spoke at the Students For Liberty Mid-Atlantic Regional Conference hosted at Drexel University on October 9, 2010.[22][23][24] Molyneux spoke at Libertopia[25] on October 14–15, 2010. Molyneux spoke at the Ontario Libertarian Party Annual Liberty Seminar at Toronto on November 6, 2010.[26][27]

This article uses content from the Wikipedia article on Stefan Molyneux under the terms of the CC-by-SA 3.0 license.